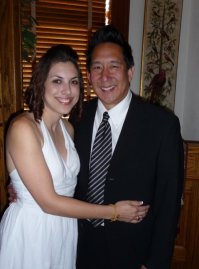 Saturday May 12th would have been my anniversary. Wedding anniversaries after death are tricky. Do they still exist? What do they mean?

It feels odd to treat them like an ordinary day. They seem to deserve more notice than that.

Turns out, there’s probably no such thing as good luck dates. Especially in the case of my luck, which basically sucks.

We fell into the habit of treating our anniversary like a family anniversary–the day that our family officially began. Sort of. I mean, from a legal perspective, anyway. Kenneth and I were together for 2 years before that. That’s the thing about dates. They are often arbitrary.

When Kenneth died two weeks before our 7th wedding anniversary, I decided to continue the tradition of celebrating the inception of our family, in lieu of being able to go on a romantic date with my husband. The only other option was the ignore the date, and that didn’t feel right. So off we went–me and my three kids–to dinner at a table for four.

I remember teasing Kenneth in the months before his death. “Our 7-year itch is coming. Will we last?”

“What do you mean?” he asked suspiciously.

I smirked. “You know what they say. You better watch out. We may not make it past seven years.”

He got mad and told me not to say that. He didn’t think it was funny.

In hindsight, it wasn’t funny.

We never even made it to our 7-year itch, not because of divorce, but were instead thwarted by an exploding aorta.

Marriage is such a complicated thing. We enter it with blinders on. We have all of these preconceived notions and expectations about it. Sometimes we are young when we make the commitment. We almost never account for the changes that we will individually experience over time. While we inevitably change, our marriage either changes along with us, or we outgrow it.

I suspect we all face these challenges to varying degrees at some point(s) in our marriages. Some of us survive the growing pains. Some of us don’t. Some of us never have to find out because one of us drops dead first.

I don’t have the answers. The only thing I can offer is perspective about what happens when your spouse passes away and you are left in the solitude of marital reflection. I also have the privilege of having records–both my journals and my late husband’s–upon which I have pored over in my quest to examine what kind of a life we had together.

Once Kenneth asked me why I never read his journals anymore. When our relationship was new, I practically shoved a microscope up his ass and inspected all aspects of his existence. I sucked his soul dry, taking anything and everything I could squeeze out of him. I looked through his journals that he kept on his computer, and I found the Mead notebooks he liked to write in. I went through his closets. Found old emails. Text messages. Boxes of old papers shoved behind a vacuum cleaner that he rarely used in that wretched studio apartment he lived in when we first met. Everything. I learned about his crushes. Saw pictures of the ex-girlfriend posed in the same hallway I stood in, and asked him questions about what he saw in her. Back when the novelty of our love still caused the butterflies to flutter in my stomach, I was hungry to know more about him, as if it somehow mattered in figuring out how our lives fit together. I wanted to excavate the layers of his life. The child version of him. His teenage self. Young adult Kenneth. The new teacher Kenneth. His life when he had a son with the woman who posed in the hallway–the nasty email exchanges they had about custody and medical bills.

And then over time there was nothing more to know. I had looked under every rock. Heard every story. I could predict what he would say before he opened his mouth. I knew all of his habits. His passwords were my passwords. I had seen him go to the bathroom in front of me a zillion times. We shared our daily commute to work, cooked dinner together every night, and I could easily look up his internet browser history if I wanted to–but I no longer had any interest. If anything, there were many times that I didn’t want in, but rather wanted out.

We want what we don’t have.

When he was alive, I wanted my freedom. I wanted a better husband. One that listened to me and understood my desires. I wanted everything that existed beyond the borders of my world. I had an insatiable appetite for more. There was always something more to want.

When he was dead, I wanted him back. I would even take that version of him who left his dirty socks on the floor and had piles of clutter everywhere he went. I wanted anything he wrote down. I wanted videos of him speaking and felt paranoid that I would forget his voice. I wanted any crumb of a memory or connection, desperate to hold on to him as his existence slipped away from me like the sand we try to hold in our hands.

Suddenly I had many unanswered questions to ask him even though I once thought I knew everything about him. I didn’t know everything, it was just that the novelty wore off, and I somehow forgot he was still there.

Something about unavailability makes a human frantic. Like when you were a child and your mom was on the phone or in the bathroom and you suddenly needed to say something to her. Or you are somewhere without water and you start to feel the narrowing of your parched throat, convinced you might die of dehydration if you don’t drink water RIGHT NOW. The more you think about what you don’t have, the more you need it.

During our marriage, Kenneth had become one of those post-it notes that you stick onto your computer screen as a reminder of something that needs your attention. You scribble something important on it with the grand plan of making it a priority, but over time your eyes become accustomed to seeing the bright yellow square, and the effect is that you somehow stop seeing it. It blends in with everything else in the room. You just pass right by, paying it no attention. When you do happen to notice, the post-it feels a little burdensome–like it’s one more thing you haven’t dealt with but probably should have, and now it feels encumbering and you grow resentful.

That was my husband: this important thing right in front of me, but I couldn’t see it.

There were a lot of complaints in both my journals and in his. Some of them valid complaints. Sometimes vicious complaints about the other person. A lot of it was one-sided angry drivel. When I first started reading them, I felt angry. I wondered if it was actually a good thing that I wasn’t married anymore. It’s a terrible thought to have when the other person is dead–the father of your children.

I wondered if our lives had really been that horrible. Had we spent the last 9 years hating each other? The journal entries seemed to indicate this, and yet I had memories that contradicted that version of our life together. It seemed more nuanced than what our angsty journal entries indicated.

I knew there had been good times. Our trip to Paris, strolling through the Jardin des Plantes. Jogging through our neighborhood in the evenings, talking so much that the 25 minutes passed quickly, motivating each other. The night before he died, sitting out on the patio after the kids went to sleep, brainstorming the details of our upcoming trip to Berlin and then falling asleep in between the sentences we exchanged in bed.

There were good times. I wasn’t crazy.

We just apparently forgot to write them down. How stupid that we spend more time on what goes wrong in our lives, and less time nurturing what went right.

I turned to photographic evidence for more proof that I wasn’t losing my mind.

Us on the fairy tale ride at Legoland, smiling for the camera. Our daughter, Eloise, sitting next to him in the front row. The baby on my lap, and our firstborn next to me. Smiling. Happy.

Us in front of General Sherman in Sequoia National Park. We were wearing our goofy camp shirts. Peter Jack is in the baby carrier, pressed against my chest. Kenneth had Eloise on his back. We smiled big while our friend took the obligatory photo. We had no idea that this would be our last camping trip together as a family of five.

Us on the day we got married at the courthouse. Later, we met our families at a restaurant. There is a photograph of all of us, me wearing Kenneth’s black suit jacket over my white sundress. His dad was in the picture; we gave him a ride home. His dad is gone now. Kenneth is gone.

Us in front of Picasso’s apartment in Montmartre. The kids eating gelato that dribbles out of their mouths.

Us on the beach, taking our last family picture. Everyone wears color-coordinated clothes and we all amazingly are looking at the camera and smiling at the same time. This is the picture that went on the funeral announcements. It got shared online as people spread the horrible news: Kenneth Shimogawa, Dead at 52.

When Kenneth and I started dating, I began a tradition of making a scrapbook or photo album for our anniversary. It includes photographs of our year together. I have stuck to that tradition. It is fascinating to look at these albums and be reminded of the good memories–the ones that seem to be forgotten when we’re busy dwelling on the negative. Our journals recorded our hate, but our albums reveal an alternate reality. A few days ago the kids and I received our album in the mail for year #9. We flipped through the pages together, lingering over the photos and recalling the many things we managed to pack into a year of living.

“We had a great year, didn’t we?” I said to them. I often feel like I’m not doing enough. Sometimes my days are plagued with feelings of falling short and failing as a mother. But in the big picture, it looks like we’re doing okay. Better than okay.

It’s funny–we really do get to choose what our mind focuses on. Our albums always remind me that there is so much more than the small moments we get stuck in.

Recently I read an article about a mother who lost her son, entitled “I’m Not Done Being Your Mom.” The author wrote, “being your mom is one of the best things in my life, and it always will be.” It resonated.

I’m not done being Kenneth’s wife. I don’t think I ever will be. And being his wife was one of the best things that happened to me, despite all the bullshit that often made me want to run away and/or write about him in my journal. Despite the gnarliest moments of our marriage, I would do it again. I’m the person I am today because of him, and we have these fun and sweet children together. It was all worth it.

Being his wife was a bittersweet honor that I will cherish for the rest of my life.

This Saturday, the kids and I will reserve a table for 4 and commemorate the beginning of our family, and celebrate the love that we will continue to grow in ways that we probably can’t envision yet.