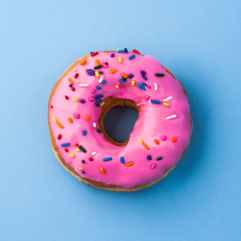 I parked my red Miata on the street, in front of the 6th grade garden. Ethan wanted to ride to school with the top down. He was looking for a distraction. We climbed out of the car and I got his backpack from the trunk. I noticed the trepidation in his expression when I helped him loop the straps over his shoulders.

A potbellied father wearing a “Junk Man” work shirt passed by us, trailing behind his pack of kids. Another family followed close behind. And then another. And another. The event had started 10 minutes before; the rat race was underway.

“Are you okay?” I asked as we walked to the multipurpose room.

“I feel pressure,” Ethan said. “There are a lot of dads in there.”

I knew, however, that there was nothing I could say that would erase the fact that we were going to Donuts with Dad, without his dad. “Try not to” were the kind of words I hated when people lobbed advice at me. Advice they never had to practice themselves.

There was a small line at the entrance. I was the only mom, until a family with both the mom and the dad came a few spots behind us in line. Inside, there were few seats available at the cafeteria-style tables and benches. It was a sea of children and fathers, with the occasional grandfather, and a few moms. Very few moms, except for the PTA volunteers.

As I waited to hand the lady at the check-in table our $5, I noticed dads and sons getting pulled over to take a photo in front of a backdrop. Nobody would ask to take our picture that day. I felt a little resentful handing over my money to the PTA that insisted on perpetuating these outdated events. I wanted to ask the woman why they haven’t considered Donuts with a Loved One instead of Donuts with Dad. Something more inclusive. I seriously doubted that a catchy name with alliteration was the reason behind events like these.

Maybe it was stupid to expect them to make an exception to their traditions for people like us. People like us–my son with the dead dad and me–we’d just have to be included with the little asterisk on the bottom of the flyer, the one next to the small print that read “or bring another special adult.” Almost as if people like us were an afterthought.

We got our donuts and I suggested to Ethan that we sit outside, where there was plenty of seating available and it was already warm and sunny at 7AM. Ethan spotted a friend and his father, and we sat at their table. We tried not to look awkward at an event for fathers when clearly we did not bring one with us.

“I don’t know what I’m more offended by,” I told Ethan, trying to make small talk to distract him. “The dad part, or the fact that they think donuts are a great thing to serve for breakfast.” I then proceeded to pull up an article on my phone that I recently read. It was about how Americans eat more than the daily recommended sugar intake at breakfast alone. Basically, we keep eating dessert for breakfast. Ethan read it with concern.

One of Ethan’s friends saw us and promptly abandoned his dad to come sit with us. I offered to move so we could all sit together, but the boy declined, saying he didn’t want to sit with his dad.

The boys chatted and picked at their donuts and also called out the names of their classmates who they spotted at other tables. They seemed to be unofficially keeping track of who was in attendance from their class.

“The anticipation is the worst part,” I said quietly to Ethan, leaning toward him. “It’s always worse thinking about it before it happens. This isn’t so bad, is it?”

“No,” Ethan agreed. There was no more trepidation in his expression. He seemed to be enjoying himself, sitting between me and his friend. The boys built a donut tower and giggled over jelly that oozed out from the middle, which they decided looked like vomit.

When Ethan was in preschool, Kenneth accompanied him to the Teddy Bear Picnic. I remember feeling jealous that Kenneth got to go and I was stuck at work. But Kenneth really wanted to attend. Ethan came home after school that day talking about his new teddy bear and about how his Daddy walked to the park with his class, so proud that Kenneth was there. Kenneth had an older son from a previous relationship who lived 8 hours away. It was a contentious situation that resulted in him missing out on all of the small ways one gets to be a father to a child, like going to these events. It was a source of pain for him, and it made him more determined to enjoy Ethan’s childhood.

Kenneth would have never dreamed in a million years that he would miss Donuts with Dad with an 8-year-old Ethan.

And I would have never dreamed that I would be a single mother trying to fill in for an absent dad. It’s like living in an alternate reality, a world I sometimes still don’t recognize.

Everyone tells you it’s no big deal, this Donuts with Dad thing. Just go with him, mom and son, they say. Moms can go too. There will be like 1 mom for every 100 people there but that’s not a big deal. Just don’t care what other people think.

Unless it’s your son.

Unless it’s your heart.

The day before Donuts with Dad, I stood with Ethan before school started in his classroom line. A little girl approached him, smiling, and said, “Ethan, you can’t go to Donuts with Dad. Your dad is DEAD.”

I watched Ethan’s face crumple, and then immediately offered an explanation to her about how I was going to represent his father, and that yes, Ethan would indeed be there.

She didn’t say it in a taunting way. It was more of a think-out-loud faux pas. But it still hurt my little boy.

Nothing I could ever say would make it better. This was something that couldn’t be fixed. The truth was, Ethan wouldn’t be going to Donuts with Dad. He’d be going to donuts with his single mother because his dad is campfire ashes. There is no way to forget the brutal details. We are all very aware of the circumstances, but to hear it said out loud was salt in the wounds.

In hindsight, I should have explained to the little girl that her words hurt Ethan, rather than trying to justify how we would be at the event. But I didn’t think of it at the time. Sometimes I still get paralyzed by the pain of seeing my little boy hurt.

Almost two years out, I’m getting used to this alternate life trajectory. At my age it’s easier to be different than the masses. I can get through social situations as the only person without a husband and not care as much these days. Not so for an 8-year-old. He has started to become self-conscious about being the only kid without a dad in our social circles. His reality is more difficult, because he has to spend the rest of his life, through his formative years, without a father. He will be reminded of fathers everywhere he goes. After bringing home the Donuts with Dad flyer, he told me several times that he kept seeing “all of these dads.” Dads everywhere. Reminders of what he doesn’t have. Somehow he must figure out how to desensitize himself to these triggers. Preferably sooner rather than later, but this is something an individual must come to terms with on their own.

I watched Ethan fret over the donuts days before it happened. I watched him go through a few days in a silent, simmering mood. I had just finished season 3 of Doctor Foster on Netflix, and there is a teenage son on the show who has anger and emotional problems because of his parents’ strife. Suddenly I was stricken with the thought of my future Ethan in a man-like body having angry outbursts and letting “this” affect him. My perfect, happy Ethan possibly devolving into a person with demons that will threaten to darken his once-sunny disposition. When he was born premature and spent two months in the NICU, Ethan was often the last baby who the nurses would feed because he never cried. He has always been that way–happy and content and undemanding. He is a naturally grateful, loving child. I feel so spoiled that this gentle, deep soul made me a mother.

The thought of that changing about him disturbed me.

No way. That was not something I could allow.

I realized then that my job was not to make him get through the loss of his father, but to help him understand the choices he still had, to help him figure out how to live in a world that has not gone as planned. A world that has scrambled the natural order of life, robbing him of a father at a young age. A life where he will not have what many others still have. I must help him accept a different trajectory, and prepare him for the many future detours he will encounter. These are the ways that he will become resilient. My job is not to make him forget or to take away his pain. My job is to help him cope with pain.

Ethan also has to learn to live in a world that forces labels and stereotypes on us. He has to become comfortable with being different. Normal families have a dad to take to Donuts with Dad. Ethan does not have a dad. Therefore, is he not normal? This is difficult for even me to internalize. But this is something he must be able to do.

He must be able to own his stories, tell his stories, and have an unwavering belief that he is still writing his story even when everything goes wrong. He has to believe that he can survive any plot twist. My Ethan has to embrace the idea that the only thing normal about this world is that all of us will have our share of pain and loss. None of us will escape it.

He has to refuse having normal defined for him. I want him to be able to define his own normal, regardless of what the rest of the world thinks. It has to be done on his own. When it comes to this, it’s him against the world. There is no hiding from it.

The reality is that grief is a lonely exile. Nobody else knows exactly how you are feeling. You can’t rely on people to be there; comfort comes and goes. Help comes and goes. Nobody can live your life, therefore they can never fully understand your circumstances.

As we were driving to swim class the next day, Ethan and I reflected about the Donuts with Dad experience, and then about our lives in general. We started talking about our upcoming trip.

By the end of this summer, and since Kenneth died, we will have gone to: Germany, France, Denmark, Italy, Japan, Australia, and Israel.

“The weird thing is, life has actually gotten better,” Ethan said. “It’s not supposed to get better if Daddy died.”

We talked about how tragedy can change us. How we might end up being better people than we would have been before the tragedy. Then we decided that there are things in life that can be good and bad. It doesn’t have to be either/or. It’s often both.

And that’s where we left it.