I’ve been a little MIA for the past couple of weeks because I was finishing a project for a contest. Now I’m back to a flurry of essay writing while I sit in the trenches of story outlining for a month or two, after which I plan to complete a new fiction project that is near and dear to my heart. Something I’ve been wanting to complete for a while.

But moving on to today’s essay. A topic I’ve thought a lot about in the past 5 years. 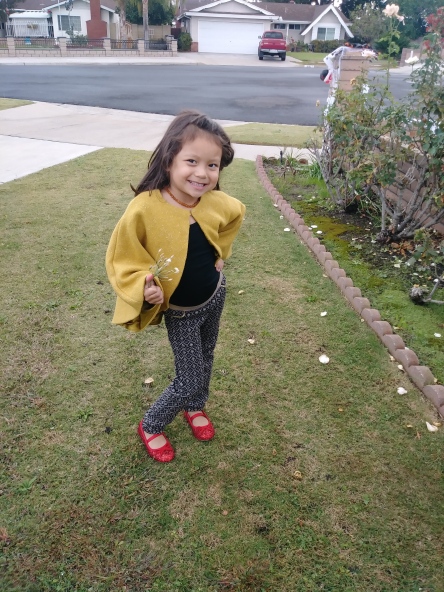 From the moment she came into this world, Eloise preferred her father. She would scowl at me and then bury her head into his chest as if he were her greatest protector. Sure, I was her meal ticket and the one who carried her inside of me for 39 weeks and gave birth to her without drugs, but her father was the one who she reached for, the one who could calm her down and make her feel special. She reveled in the role of being daddy’s girl.

Kenneth was kind, gentle, and patient with Ellie. He was like that with all of his children, but he was particularly sensitive with her. When she was being potty trained, Kenneth sat next to her for however long she needed. He’d patiently read to her a book and keep her company with words of encouragement, usually while I threw my hands up in the air and went to do some other pressing chore from a long list of things to do. If Ellie made a mistake or spilled her drink for the 20th time that day, he reassured her that it was okay and calmly cleaned it up. Kenneth would lie on the colorful play mat next to her while she played with her toys. He had no problem fetching toys that she threw over the side of her high chair over and over again. He brushed her hair and read to her the 10th book of the evening, brought her a cup of water, and handled whatever other bedtime curveball she threw at him to avoid lights out. He never lost his temper. She had him wrapped around her tiny finger.

I got annoyed at him for pandering to her brattiness. To me, Eloise reminded me a lot of him: the whiny middle child who always thought they were getting short-changed. She cried a lot as a baby and had projectile spit-up that needed a clean-up crew several times a day. She wasn’t cuddly like her older brother, and not as smiley as her younger brother. She was super serious, just like her father. Her mouth even had the same downward curve when her lips were solemnly pressed together and it reminded me of her half-brother, another serious child. It felt like she was pushing me away from the moment she was born.

When Kenneth died, it was Eloise I felt sorry for the most. Peter was clueless. Ethan was very close to his father, but he was definitely a mama’s boy. I knew I could smother him with love and take care of him. But Eloise?

I was seriously worried about her.

How was I going to be enough for her?

I have to admit, there were several times when I told Kenneth “I don’t know how I’m going to survive the rest of my life with Eloise. She’s a pain in the ass.”

I decided that I had to make it a point not to butt heads with my daughter. I didn’t want to live that way. And now I had an extra responsibility. I had to make up for the fact that she had lost her favorite person: her father. I’d have to love her enough for the both of us. She needed me.

I realized that the things that bugged me about Eloise weren’t necessarily the traits she inherited from her father.

It was a broader issue of a mother raising a daughter. Something I imagine all of us mothers must deal with to some degree.

I saw my weaknesses in her, and I had an overwhelming urge to want to fix her. To not let her repeat any of my mistakes.

I knew it was daughter-specific because I never felt that way with the boys. I couldn’t relate to the way little boys got on their hands and knees and play with Hot Wheels. I couldn’t relate to the way boys want to get dirty, how they swing their swords around and want to shoot at things, or the way that they are constantly wrestling like puppies with boundless energy.

I want to take it all away from her. Stop her from going down that same familiar path that will take her years to recover from.

But it’s not my job to fix her.

I find myself wanting to change the things about her that aren’t me, like the way she loves princesses and pink and won’t believe me when I say black is the best color. She loves cats and names everything “Sparkle Sparkle Unicorn.” She obsesses over lipstick and shoes and purses and sticks her hips out for pictures and spends time brushing her hair and coordinating outfits– none of which are anything like me.

But that’s not my job to tell my daughter what she should or shouldn’t like.

Eloise is 4.5 years old. I’m not naive enough to think that the job of raising a daughter will get any easier, or that I’ve even reached the depths of the trials and tribulations of mothering a daughter.

But I don’t want to wait until she is an adult to think about what I should’ve done for her.

I want to do better for her. We can always do better. I know that it will be a job that will require a lot of recalibration and reflection. A job that will require more listening than reacting. A job that I will probably never get completely right. But I want to at least do this job in a way that when my daughter grows up, she will know that I did my very best to be a better woman for her. A woman that always stood by her side.

This is what I’ve come up with as my job as Eloise’s mother:

My job is to help her be a life-long learner.

To teach her the importance of health.

To speak her love language, even when it is not the same as mine. This will involve lots of hugs when she needs reassurance and verbal praise and reminders that she is smart and capable and important.

My job is to help her have as many opportunities as possible.

To help her see that her worth is not tied to her sex.

To help her see through social barriers and to help her acquire the tools to tear them down.

My job is to be her cheerleader. Her nurse. A person who will listen to her. A mentor. Somebody who she can go to with her fears and questions. A person who will help her troubleshoot the inevitable problems that life presents without judgement.

My job is to take interest in the things that interest her, even when they aren’t what I would choose for myself.

My job is to help her become resilient. To teach her how to rely on herself. To never give up, even when the world feels patently unfair.

To find a new path when one doesn’t work out.

To have an open mind.

To try. And try again. And again. Always keep trying.

My job is to teach her about life through the way that I live, as her role model. Not so she can be just like me, but so she can see what is possible for women. And then let her choose her own path.

My job is to be there for my daughter. I am enough for her. I am exactly what she needs. That in this big and scary world we have each other. That I will always love her, even when my body is no longer in this world.

If I can remember anything from my own journey as a woman, it’s that we all want to know that we are enough.

Eloise is enough. She was born enough.

My job as her mother is to spend the rest of my life reminding her that she is enough.