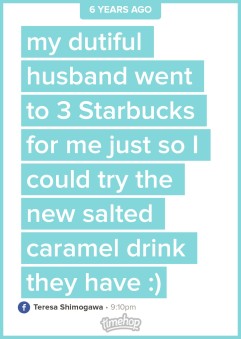 The feeling of missing someone is a tricky subject. This morning I received a reminder from Timehop about a Facebook status I posted 6 years ago. It said: my dutiful husband went to 3 Starbucks for me just so I could try the new salted caramel drink they have 🙂

Many things have changed in the past 6 years. First of all, you couldn’t pay me to drink one of those diabetes-inducing drinks today. But even more significant, I don’t have a husband to buy the drink for me even if I wanted one.

Thanks a lot, Timehop. I could have done without the reminder.

Recently someone asked if I missed Kenneth. I appreciated the question. Really. Most of the time people are too afraid to ask about this pain I carry around every single day, so when somebody does, it’s refreshing to feel like for once somebody sees me.

Do I miss Kenneth?

I think I shrugged.

I don’t know how to answer that question. Missing feels like such a huge waste of time. It’s a reminder of the hurt that would be better off bottled up and hidden inside of a forgotten drawer that never gets opened except in the solitude of the night with a glass of wine and a box of tissues. Every time I wander down that road I have an overwhelming urge to want to slap myself, so I tend to avoid it.

I feel like it’s more of a matter of not liking things.

I don’t like being alone. I haven’t enjoyed the loss of my ally who was always in my corner. I don’t like that I have to live a life where I am required to push 10 times harder with 10 times more grit and at the end of every single day I always feel like it was never enough.

I don’t like that my errand boy isn’t around to do my bidding.

I don’t like having to deal with the sexist attitudes toward single women and single mothers.

Speaking of which, I hate being a single mother. You do everything by the book in life but one day you wake up and suddenly you are everything you’re not supposed to be, plunged into a new reality where everything is harder and you feel like one big repellent to the rest of the world.

I don’t like not having my person to discuss politics and ideas and having him totally understand me.

I don’t like not having my fan boy around. I liked being the queen.

I don’t like having to depend on help with the kids.

I don’t like having another birthday or anniversary or holiday pass and always feeling incomplete.

I don’t like having to make big decisions by myself.

I don’t like facing uncertainty without a shoulder to lean on.

I don’t like being the only adult responsible for the family.

I don’t like other people’s assumptions about a life they don’t understand.

I don’t like having to always be the one to do the dishes.

I don’t like the way the rest of life seems to go exponentially faster but he will always be left behind, me being pushed along, forced to smile even when the searing pain of my bones being crushed with grief makes it difficult to force another stupid smile so you don’t think I’m incapable of functioning amidst the suffocating realities of life.

Do I miss Kenneth?

Let me try to explain how I miss Kenneth. This missing is the feeling I had to carry to the public education conference in Oakland last weekend, knowing that he should have been there with me instead of in a cemetery. I carry this feeling around every single night when I go to bed alone. I see it in my children’s eyes at school events where a father should be. It’s a feeling that ebbs and flows inside of me when I am scared or unsure or worried or stressed or angry. I see it in the soft light of a rising sun. I hear it in the sound of church bells, and I feel it in the space of an empty passenger seat. I notice it in the crispness of a cold night, in the darting movement of a dragonfly, and sometimes it hits me when I set the platter of food down on the dinner table and notice the extra chair.

But I try not to feel any of it, or think too much about it, because nothing will bring him or my former life back.

As for how I deal with the missing, it’s pretty simple: I force myself to live this exiled life in a way that tries to create meaning out of the inexplicable pain I’ve been forced to carry inside of me every single day.

The alternative is to crumble and stay broken, but I want to believe that maybe, just maybe, there might be a reason for all of this. Maybe I need to be patient enough to wait for it to unfold, and for right now I have to just choose to believe.