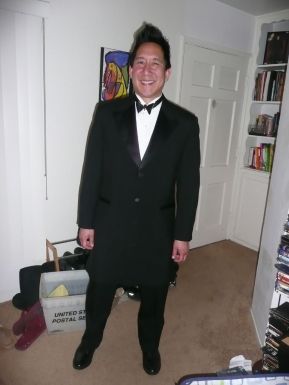 When Kenneth passed away, I thought I needed to write down memories about him for the kids, and maybe for myself too. I worried that I would forget the details. Moments we had together. His voice. His face. I found a close-up picture of him and realized that I’ve already forgotten the curve of his lips.

I’ve mostly avoided writing anything specifically about him, opting instead to write about my experiences. At first it was because of the blistering pain I felt. Then I was busy doing other stuff. Now I think enough time and space has passed and it is time to sit down and do this so our very young children can know more about who their father was.

Of course, all of these stories will be naturally colored by my observations, experiences, and perspective. You know, the way I saw things. He would most likely have his own opinion if he was here to tell you about it. And he WOULD have told you about it.

For example, I almost wrote “The Pickup Artist (In His Head)” for a title. I deleted “in his head,” picturing him scowling, arguing over how he was a great pickup artist. Whatever, Kenneth, I answer back in my mind. Whatever you say.

These are topics I hope to cover in future essays:

And maybe more, after I tackle these ones. There’s so much to say about Kenneth. Today, I choose Kenneth the Pickup Artist.

I wonder if I’m going to be revealing too much. If he were alive he’d freak out. But, he’s not. And it’s all so hilarious and ridiculous that I think it was part of his charm. I have to share. This is too good to keep to myself.

For my children who read this someday: I hope none of this offends your idea of who your Pops was. I know he would want you to picture him dressed in his ripped True Religion jeans and those black, gothic New Rock boots that added at least 3” to his height, his thick hair styled in a faux hawk, and a clunky King Baby bracelet dangling from his wrist (that he made us drive all the way to Los Angeles for). We can’t leave out one of his secret touches: wearing women’s body lotion. I’ll never forget the day back when he lived in the tiny studio apartment in Belmont Shore, when I found it in his bathroom and asked with a raised eyebrow why he had it. Women love it, he informed me, matter-of-factly.

I know the pictures from his later years revealed Frumpy Dad, but he was once Badass Cool Pickup Artist (at least in his mind, and he’d want you to play along with this).

In my defense, none of this ridiculousness mattered. He might claim he used his skills on me, but really I was smitten with his brain. If he were here, he’d get mad at me for discounting his charm, and he’d argue that his pickup artist training gave him the confidence and skills to talk to me and have me listen long enough to give him a chance. Then he would proceed to talk your ears off about the theories behind pickup. If you were still listening, he would probably change the subject to juicing, fracking, postmodernism, and/or politics. It would depend on what year we were talking about. He went through phases.

When Kenneth died, I knew there was no way I’d find another character like him. He was truly one-of-a-kind, for better or worse, and you can’t fully understand this unless you knew him. There were so many different sides of him, too. Some of us knew only certain sides of him. I always like hearing about his different “sides” from people who were with him during various stages in his life. His collection of books reveal his varied interests. The other day I was looking for an Albert Camus book on Amazon. Then, Peter started messing with my bookshelves, and out fell one of Camus’ books. Of course Kenneth had it. Of course! It made me miss him a little bit more.

For some of you “Kenneth the Pickup Artist” isn’t a surprise, but maybe for others it is. I remember the time in the first weeks of when we started to really talk to each other, when he accused me of looking at him like a fat kid looks at a cheeseburger. I remember laughing. I don’t remember it sounding like a canned line.

But as it turned out, it was. He was so proud of his hook line and sinker.

(I still maintain that it was by no means influential on me. I have my integrity to preserve.)

He tried to hide the pickup artist identity in the early months of our relationship, but 1) Kenneth was a horrible liar, and 2) I’m a fantastic snoop. He had no chance against me. He had ebooks all over his neon green desktop computer. Nine years later, he still bitterly recalled the days of me putting a “microscope” up his you-know-what when we first met. I call it a background check. Toward the end of his life, he asked me why I never read his journals or computer anymore.

“You’re boring now,” I told him, rolling my eyes. “I mean, you wear Star Trek t-shirts all of the time.” He got mad.

But in the early days, I felt like I uncovered a giant “thing.” I wasn’t really ever offended by it, as some women are. And when Kenneth was passionate about something, he put his entire heart into it, and he would spend his time convincing you that this was The Way To Live Your Life. Everything was black or white. For him, all men MUST learn how to attract women. It was not innate, he believed. This was important, breakthrough, life-altering material.

A Pickup Artist? What the hell was that?

I’d give you the history, but I’d probably bungle it, and I’m not that interested in the etymology of pickup artists.

I’ll give you my short answer (but keep in mind Kenneth would be interrupting at this point, correcting me on the details of this very important field of study).

Basically, Pickup Artists (PUAs) are guys who learn how to attract women and improve their “game” (seduction methods). They use canned lines and manufactured charisma that they learn and practice. There are tons of “gurus” and seduction methods to choose from. You can attend bootcamps (he did, before he met me). Competing theories. They study neuro-linguistic programming. Neil Strauss wrote The Game, which you can find anywhere, including at Gatwick Airport in London, if you’re interested. There was the Mystery Method. A TV show.

They have underground communities, or “seduction lairs.”

PUAs do their “sarging” in pairs, with a “wingman.” I met a few of his wingmen. (I still giggle over all of it. No offense to the PUAs and retired PUAs who will read this. It’s just really as adorable as Peter carrying around his foam sword and pretending to be a knight.) That line right there would have gotten me in so much trouble with Kenneth. I’m not taking it seriously! A man’s dating life is serious! We women just don’t understand a man’s pain.

PUAs basically approach as many women as possible with their clever, canned “openings” to improve their skillset. Clubs are a good place to do this. They work on being “alpha males.” They emphasize the importance of DHVs (displays of higher value) and avoiding DLVs (displays of lower value). They learn how to “neg” women (back-handed compliments or something to make the woman not feel as confident). They have contempt for AFCs “average frustrated chumps.” I swear, I had to learn way too many acronyms when I agreed to date Kenneth.

Kenneth treated all of this like his sacred religion. In fact, after our first, second, and third child, I’d look at the boxes of printed ebooks that he still kept in the garage and told him to “throw that shit away” at least on a quarterly basis. No, he said, acting like I told him to throw away his childhood stuffed Yogi Bear (which, by the way, he still had). He claimed he needed all of his books for our boys, who would surely want his expertise one day.

“Right, Kenneth,” I told him. “Like they are going to need their wheelchair-bound father in diapers teaching them how to sarge. Surrrrrrre.”

“They’re going to listen to me! The proof is in the pudding. I got you, right?”

“You did not get me because of pickup lines,” I’d argue.

I was subjected to a lot of lessons about pickup. Theories. Philosophies. Basically, I deserve an award for my patience. I mean, he might as well have droned on and on about basket weaving.

One day, pregnant with our daughter, I asked him what he was going to do when karma hit him upside the head with a DAUGHTER. How could he sleep knowing she’d be walking around in a world with men who could put a spell over her with their tricky lines?

“I’m going to teach her everything in reverse,” he said, smugly. “And she’s going to develop her brains. Intelligence is more important than beauty. You know. Just in case she’s ugly.”

He had answers for everything. God, I miss him.