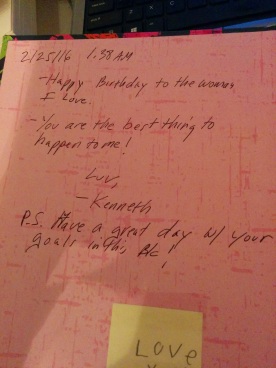 Pictured: the better part of relationships.

“Once you lose yourself, you have two choices: find the person you used to be, or lose that person completely.” -H.G. Wells

In up to 30% of twin pregnancies, something called “vanishing twin syndrome” occurs. This is where one twin’s fetal tissue is absorbed by the other twin, giving the appearance that it has vanished. You can have a doctor’s appointment and an ultrasound that shows two babies, but by the next appointment there is just one. Poof.

This isn’t about twins. At least not the traditional type of twins you probably have in your mind. Instead, I’d like to address something much more common. Something I find absolutely terrifying, but something you can find in the majority of households. It was also in my household.

I kind of made that up, so me explain.

Vanishing Self Syndrome, in my opinion, is when an individual becomes absorbed into their significant other’s life, taking on the other person’s hobbies, interests, habits, ideology, and possibly their entire way of thinking. Two identities become one. You know, like Brangelina. It seems almost natural for this to happen in a relationship, and society expects it. You don’t think of the two people as individuals; they are one unit.

It might explain the high divorce rate. But that’s just me speculating.

Maybe you started liking a certain sport or team for them. Started drinking their favorite beer. Stopped hanging out with your friends as much. Began voting for the same party and/or candidates that they support, and it’s different than the way you used to vote. Maybe you suddenly had a new hobby, and coincidentally (or not) it was your significant other’s hobby first. Maybe you gave up a dream to support theirs. We can go on and on.

I’ve seen some of the strongest people I know crumble into their significant other’s frame.

How many people can’t leave their significant other home alone for very long? Or feel the need to rush home to make sure they have dinner, or that they have dinner together?

I know people who have been married for 40 years and can barely spend one day away from the other person.

I want to know why people seem to lose their ability to make decisions when they are in a relationship. Everything requires an official consultation.

You call your friend and ask them, “Hey, So-and-So, do you want to go to a concert next month?”

“Let me check with Mr. So-and-So first,” they tell you.

Or you’ll get a scared, “I don’t know if my wife will say yes,” and they are already quivering in their boots because they know The Wife is going to throw a fit when they bring it up, but they really want to go, so they’re going to take their chances and ask when she seems like she’s in a good mood.

When did we stop being in charge of our own calendars? When did our significant others become our parents? Nobody told us we were going to become adults someday who would have to ask permission to do EVERYTHING.

They trick us with pretty weddings and fluffy dresses and images of happily strolling the aisles of Bed Bath and Beyond and picking out baby names and growing old together.

That was all a facade.

It was all tricks to get us to think “this” would be a good idea.

I was there. Not all the way. I wasn’t ever going to allow my husband to boss me around like a father. But we’ve all been “there” to varying degrees.

I recently went to a Tom Petty concert and had this moment of realization that if my husband were still alive, I probably would not be at that concert. First, he would have objected to the cost of the tickets. Second, he would have complained about how terrible Tom Petty is (just because he didn’t like him). Then he would have moaned and groaned about being on kid duty by himself. And if by chance he didn’t complain and whine enough to deter me from going, inevitably I would have gotten that text an hour into the show.

“What time are you coming home?”

It’s like you’re 17 years old and your mom is on the couch waiting for you. Come on.

I COME HOME WHEN I WANT TO COME HOME.

That’s what you want to say. But you never do, because that will cause World War III and you want to come home and go to sleep in peace.

Why do we tolerate this? I know you know what I am talking about. There has to be some weird biological reason why our other half can’t stand being separated from us. Do we get magnets implanted inside of us when we decide to be somebody’s significant other? It must be a weird, alien conspiracy. I don’t know of any other explanation.

I’m convinced that we need to spend time alone every single day. Even when we don’t think we need it. We can’t know who we are unless we have time to check in with ourselves, away from the opinions and interruptions of other people. This doesn’t mean that you think less of your significant other. It means you aren’t a needy barnacle, or a toddler clinging to your significant other’s leg. It means you have a life. Your own identity. That’s a good thing. And when they have their own identity too, both of you will be happier.

A lot of great things about who I am today came from my husband. I don’t regret marriage. I’m thankful that I had Kenneth in my life and would do it again.

But I would be lying if I said it wasn’t a pain in the butt to bicker with my spouse over the things I wanted control over, like my time, and what I wanted to do. Although he was very supportive of many of my endeavors, and he taught me so much and introduced me to many things, losing him has taught me something immeasurably important: I do not want to eat somebody else’s soul, and nobody is allowed to eat mine.

Maybe you have to be on both ends of this to see it. To see yourself as a barnacle, and then to see yourself as a free-agent, floating in a vast ocean of innumerable opportunities. Then you realize that there is middle ground, and that’s what you need to find.

Relationships can be meaningful and fulfilling. Connecting with other humans feels safe and warm, and it’s great to have a bestfriend that you get to live with and share goals and interests with in a world that can feel scary. However, I often wonder why I didn’t hear more conversations–especially earlier in my life–about what to do before we decide to settle down with another human. (By the way, why is it “settle down”? I want “settle up.” Like reach the stars, up. Not down.)

I don’t believe we are born ready to be in relationships. There are many skills to acquire and introspective work to be done to protect our long-term happiness. We have to figure out what makes us happy before we go running off trying to find it. But that’s not what seems to happen. At least not right away. For many of us, it takes the end of one relationship to prepare us for the next.

We have to go into relationships knowing ourselves. Really knowing ourselves. What we like. What fulfills us. What we want to experience. What’s on our bucket list. We should envision our lives 10, 20, and 30 years out. We should know what the non-negotiables are in our life. We must have strong boundaries. We have to establish our proverbial bargaining table with our significant other that is equitable, transparent, and supportive. We have to go back to that bargaining table again and again and again, without resentment, to rebalance. Because we change. Everyone changes.

Life is always a balancing act. You’re going to have to give. But you should be able to take too. Balancing requires constant readjustment. Tweaks. Discussions. Being on the same page and embracing that change is a normal and healthy phenomenon of life.

Everyone has to make concessions and compromises in relationships. I’m not advocating that you stop compromising. The concern is when these compromises and concessions go beyond what you’ll watch on TV tonight and become serious roadblocks to your independence, your free will, and doing what fulfills you. The ideal situation is to find a significant other who is supportive and who loves you enough to not feel the need to change you, or control you. That’s what mutual respect is.

There’s a fine line between enjoying a healthy relationship with someone versus getting swallowed up by them.

This is a touchy subject. Nobody wants to admit that they’ve morphed into one identity with their significant other. We don’t talk about this enough, so it makes us nervous. Maybe we’re embarrassed. Maybe it’s more important for us to be Fake Happy than to be honest with ourselves and others about our experiences in life . We wouldn’t want anyone to think we aren’t living our Happily Ever After.

Or maybe you like having one identity. That’s possible.

Hey, this is all just my opinion based on my personal experiences. There is no right or wrong answer. My position is that you should at least have the information, and then you decide for yourself with your eyes open about what you want to do.

All I’m saying is that maybe we should start talking about it.

I realized, after Kenneth died, that once upon a time I liked going to shows at the Pantages Theater and I also liked going to hockey games, both of which I didn’t do while married because he wasn’t interested. There were parts of me I didn’t even remember anymore.

The interesting thing about life is that we seem to have a propensity to lose what is unique about us. It starts during childhood, when society begins to shape our thoughts and feelings and imposes upon us a distorted concept of what is “normal”. Then we settle on living a one-dimensional life as a Married Unit, because we are taught that this is what we should do. We let go of the unique and full life we were born to live. We forget who we used to be and what we used to want. That person becomes a stranger to us.

When we have kids, do we dream of them getting married and then being bossed around by their spouse for the rest of their lives?

So why would we want less for ourselves?

Our minds already wreak enough havoc on our identities. We do enough damage all by ourselves. Society gives us a good thrashing. The last thing we need is to have a relationship that annihilates who we are.

We can have relationships and our own identities. We don’t have to choose between them. We can have our cake and eat it too. It’s time to abandon scarcity thinking and demand that we live authentic lives.

I think it starts with talking about Vanishing Self Syndrome. And remembering who we used to be, and fighting to be that person. I feel like I’m worth that struggle, and I know you are too.